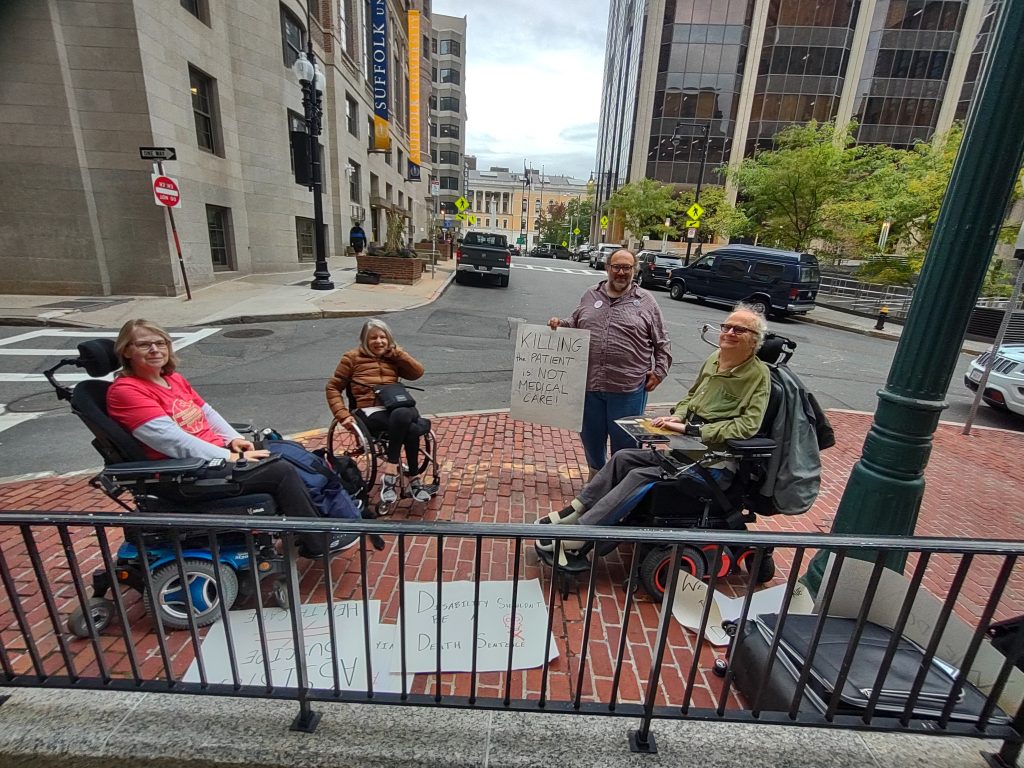 On Thursday, October 13th, members of Not Dead Yet and Second Thoughts gathered outside the Supreme Judicial Courts (SJC).

People showed up with signs and flyers to remind the court and anyone who passed by that assisted suicide public policy, whether through the legislature or the the court, is dangerous and discriminatory public policy. A group gathered outside the employee entrance and engaged with several people walking by.

Members of the media were also present to capture the gathering.

Five different speakers briefly shared their thoughts and opinions about the Kligler case and the implications of a decision that would effectively legalize assisted suicide via livestream.

First up, Anita Cameron (Director of Minority Outreach at Not Dead Yet) joined via Zoom and provided helpful information about the disparities of assisted suicide laws for people of color. She stated, “As long as we live under a health care system riddled with racial disparities and disability discrimination there is no place for doctor assisted suicide.”

After Anita, John Kelly (Director of Second Thoughts MA) spoke in-person and declared, “We are here today to remind the Supreme Judicial Court that the issue of assisted suicide belongs in the People’s Legislature, not in a court of seven elites with a research staff.”

He states further “When we feel suicidal, we demand the same suicide prevention services that other people receive. The ADA demands it.”

John Kelly then requested a minute of silence for Paul Spooner who passed away recently. Paul was a disability rights activist who worked alongside Not Dead Yet to promote that people are not better off dead than disabled.

Following John, was Pam Daly (United Spinal), who spoke in person and discussed the loosening of parameters around assisted suicide.

Next, Ellen Leigh (Member of Second Thoughts Massachusetts) spoke saying “I used to be all for Assisted Suicide until I learned it’s really about disability.”

Ellen also stated that, “We need to have physicians who are not potentially influencing people’s decisions to die, and we need to have good quality and available-to-all hospice and palliative care and support services and fully funded home care so that people aren’t choosing assisted suicide because we don’t have other options or supports.”

Finally, Jules Good (Assistant Director of Not Dead Yet) remarked that, “These are policies that directly devalue the lives of disabled people and other vulnerable people… There is nothing that a court can do that will inherently strip the value and humanity that disabled people have.”

Bravo and thanks to our friends at Not Dead Yet, 2nd Thoughts MA, and throughout the disability community for their tireless efforts in this fight!

The Dystopian Use of Assisted Suicide

Doctors and healthcare professionals should not be steering their patients toward a decision that harms them in an irreversible way.

Money and Discrimination Key Reasons Patient Pressured Toward Assisted Suicide Roger Foley is a Canadian man who is being pressured to die by assisted suicide. His disability requires consistent care and he will continue to require medical assistance as his condition is degenerative. Mr. Foley wants to keep living and receive care that is specified

Doctors Avoid Patients with Disabilities, Putting Many at Risk of Assisted Suicide

Doctors Avoid Patients with Disabilities, Putting Many at Risk of Assisted Suicide In the healthcare system, it does not take much to see that it is broken and disparities in care are prevalent. A recent article demonstrates this fact by telling the findings of Dr. Iezzoni at Harvard. She conducted anonymous research on a sample